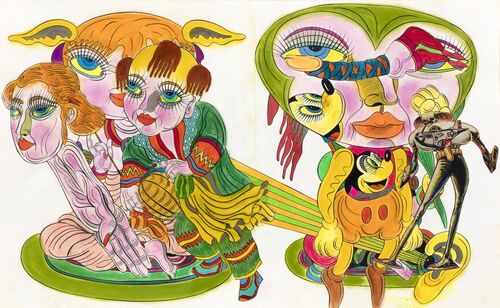 In the United States, Takashi Murakami’s cartoon flowers and Yayoi Kusama’s mirrored boxes dominate our conception of Japanese contemporary art. With their vibrant installations and paintings, these superstars tear at the boundary between art and design, bringing mid-century Pop principles into the 21st century. Yet two exhibitions at New York’s Deitch Projects—a group show titled “Tokyo Pop Underground,” and a solo show of work by Keiichi Tanaami—unite the work of 14 other Japanese artists. Active from 1960s to today, these artists surface the vibrancy of Tokyo’s underground scene.

“After [the Japanese] people lost themselves, just surviving and rebuilding the country after the war, the ’60s were a time to leave the past and head for the future,” explained Shinji Nanzuka, the Tokyo-based gallerist who curated the Deitch show. “The youth generation started a lot of radical growth.” Artists reckoned with a productive anxiety towards the United States—which bombed their country—and appreciation for the country’s cultural output. They incorporated violent and sexually explicit imagery into their new work while adopting elements of street art, which was emerging in the West. Influenced by manga, fashion, animation, and underground music, the following artists have forged a new path forward for Japanese art. 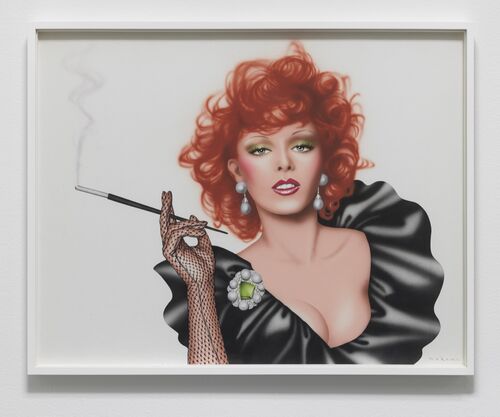 Harumi Yamaguchi’s illustrations revolve around fashion. In hyperrealistic detail, she portrays confident women in character-defining clothing. In Balloon Skirt (1984), the central figure appears to sprout from a pumpkin-shaped garment with thin stripes of red, blue, purple, and yellow. A cherry-hued belt cinches her tiny waist, connecting the skirt to a tight, polka-dotted tank top. 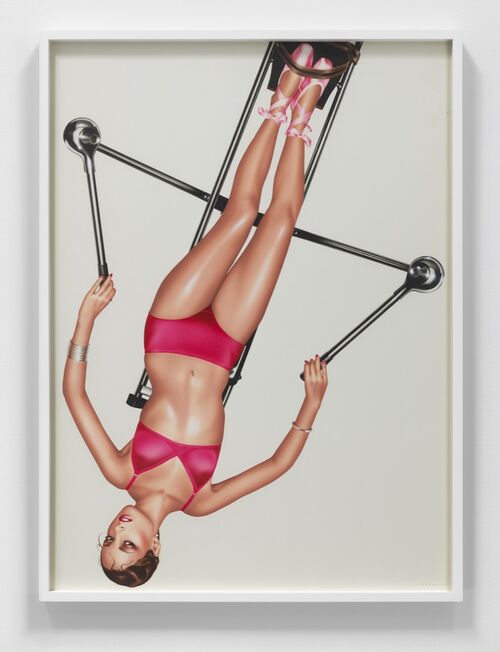 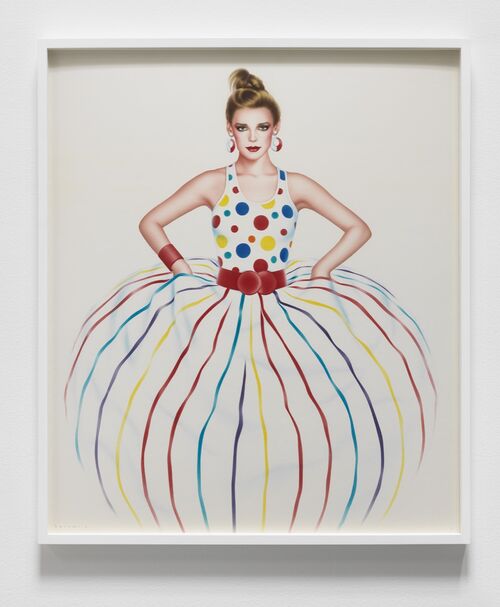 The woman in Exercise (1979), who hangs upside-down from a sleek, fantastical workout machine, is more scantily attired. Her magenta bikini and carnation-colored lace-up shoes don’t seem like the best clothes to wear to the gym, but that’s not the point: Yamaguchi, one of the “Shibuya Girls” who embraced fashion in the 1960s, advocates self-expression over function. 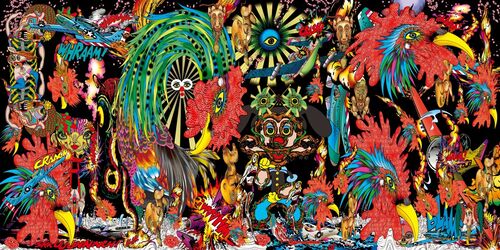 Keiichi Tanaami creates busy, vibrant worlds filled with comic book imagery, women, and lots of eyes. Cartoonish, nude figures—often reminiscent of pin-ups and Betty Boop—appear alongside explosions and block-lettered exclamations: for example, “BOOM!” or “WHRUMP!” Lust and violence, sex and death, are yet again side by side. Tanaami’s paintings, prints, sculptures, and works on paper are on view at a solo show at Deitch’s second location on Grand Street. 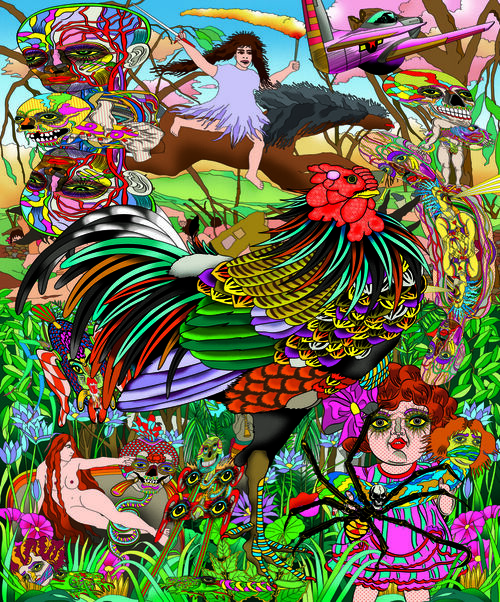 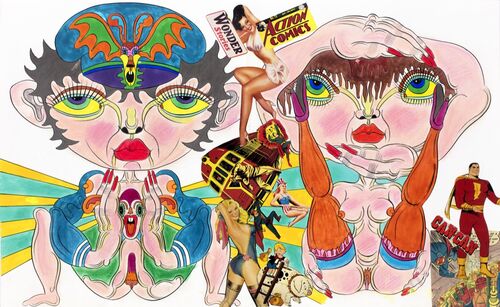 A recent series of digital canvas prints, “Adventure of the Eyes” (2019), incorporates collaged photographs of women, skeletons, and machines, making for eerie, highly textured mash-ups with vicious undercurrents. “Tanaami represents how Japanese culture was rebuilt, with the U.S.’s influence, after the war,” said Nanzuka. “His works show complex feeling against the country.” 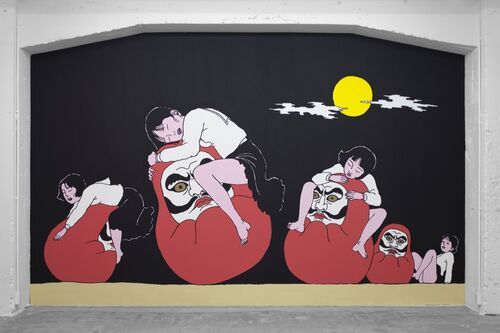 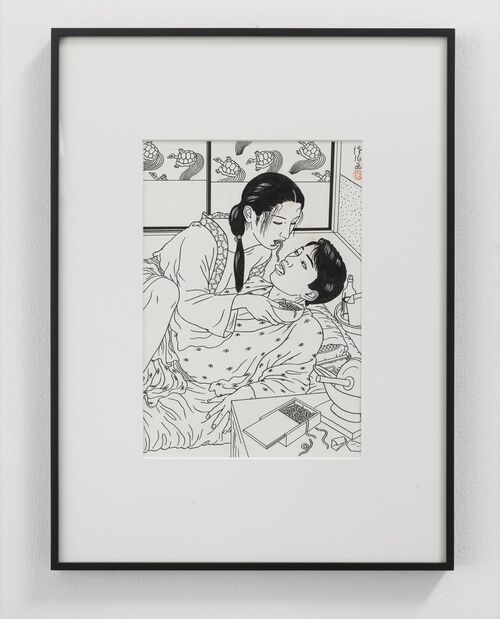 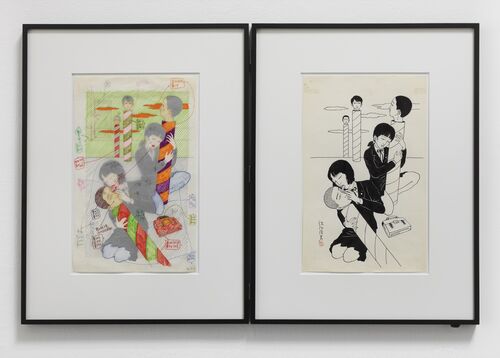 This fall, a classic Saeki composition, Yarai (1972), will adorn the cover of Penguin Classics’s newly published Japanese Ghost Stories by Lafcadio Hearn. In soft shades of yellow and midnight blues, the reproduction features a boy in bed with a naked woman standing behind him; she wields a sickle in one hand and a severed head in the other. In Saeki’s work, desire and nightmare converge—Freud would have a field day. 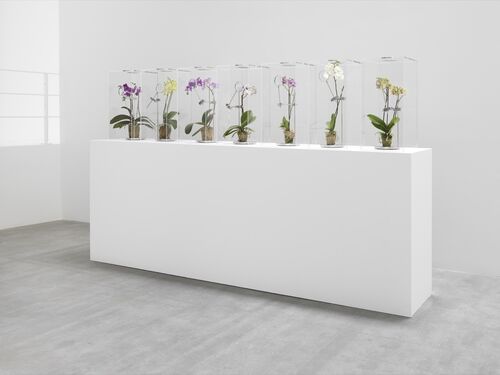 Ikebana, the Japanese art of flower arranging, emerged in the 7th century. Buddhism was spreading through the country, and converts were offering up carefully composed blooms at new temple shrines. Makoto Azuma’s practice proves that there’s still plenty of innovation to be made. His arrangements, or sculptures, range from internationally sourced bouquets propped on metal pipes to an assortment of giant pink lotus and their elephantine leaves positioned on the road in front of a foggy harbor.

At Deitch, he presents pink and white flowers that rise on thin stalks. They reside in their own glass cases, perched on a silver stand that supports a magnifying glass. Gallery-goers can peer at the enlarged buds, becoming amateur botanists as much as they are art viewers. 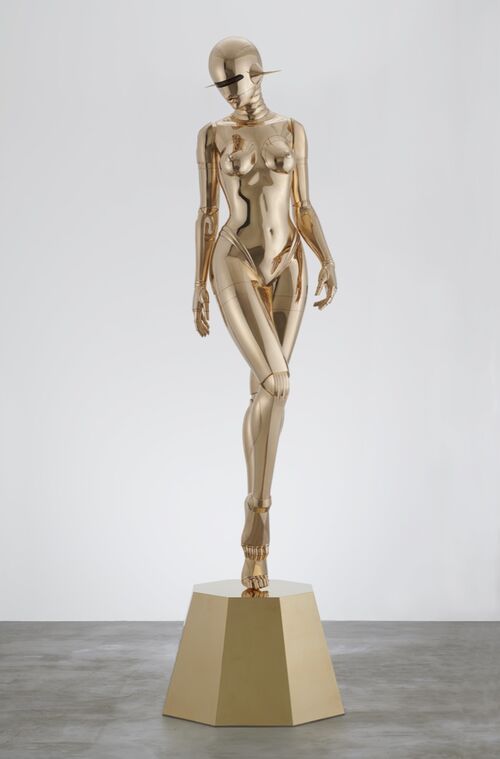 Hajime Sorayama designs sexy robots. He paints and sculpts shiny, mechanized female figures with flawless silver skin and Barbie-esque proportions. As if there were any lingering doubt about what Sorayama intends, he unambiguously titles the life-size sculptures “Sexy Robots.” 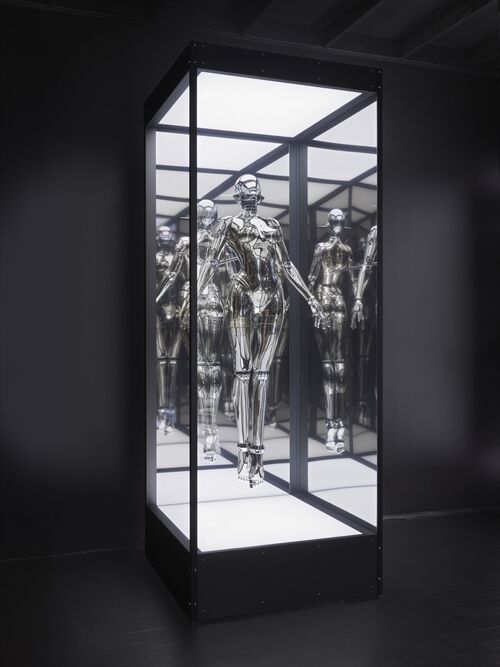 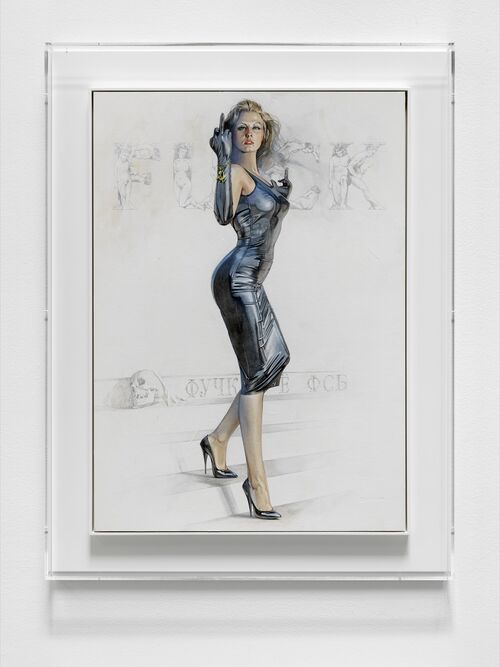 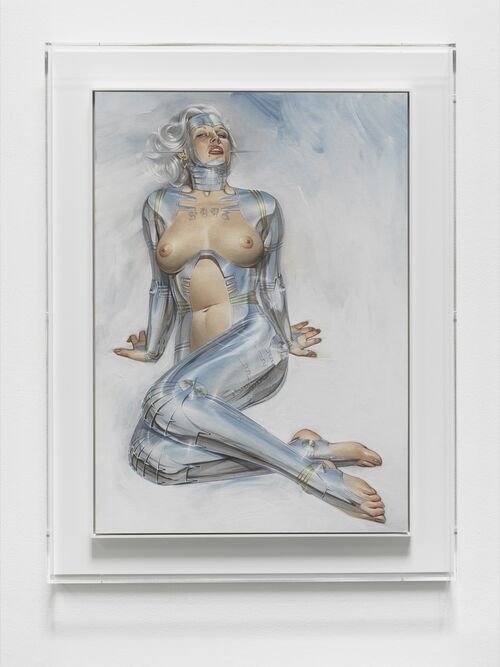 Six of them hover in glass cases in a darkened room at Deitch, their fiberglass backs arched and their breasts pert. With their eerie sameness, zoolike containment, lack of facial features, and apparent resistance to gravity, these works—editions of Sexy Robot_Floating (2019)—make for a disturbing presentation. One wonders about the prospective buyers, and whether they might actually prefer the company of such apparently flawless, mute figures to that of real, flesh-and-blood women. 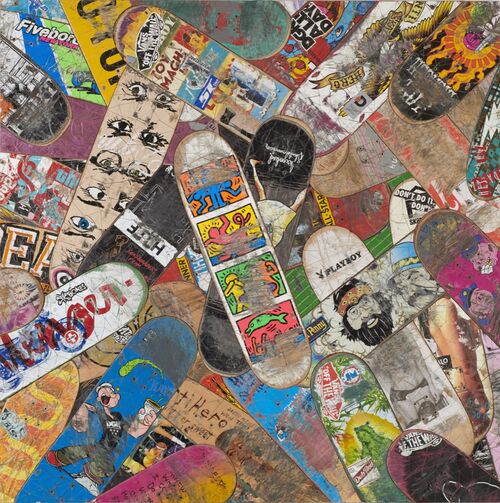 Haroshi’s predominant medium, the skateboard deck, makes him a thoroughly contemporary artist in our era of Supreme hype and the sport’s impending debut in the 2020 Olympics, which will take place in Tokyo. The artist—a self-taught woodworker—makes colorful action figures from boards he’s layered, then cut. Some works resemble mythical figures such as mummies or King Kong, while others look like animal/man hybrids sprung from Haroshi’s own imagination.

At Deitch, he’s showing Mosh Pit (2019), a mass of used skateboard decks combined into a square composition reaching about 16 by 16 feet. Through the grit, the viewer can make out individual designs, many of which reference Pop art over the decades: a sketch of a KAWS creature; Andy Warhol’s Marilyn Monroe portraits and Campbell’s soup canvases; Keith Haring figures; Hello Kitty; and Art Paul’s iconic Playboy bunny design. Presented on gallery walls instead of on the street or underfoot, the boards adopt new aesthetic importance. 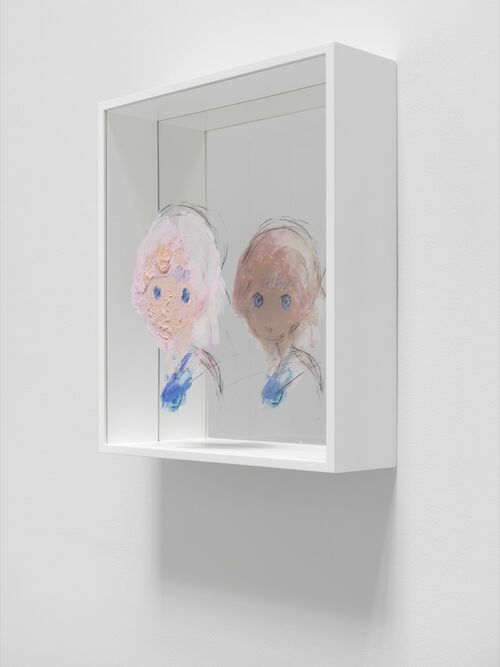 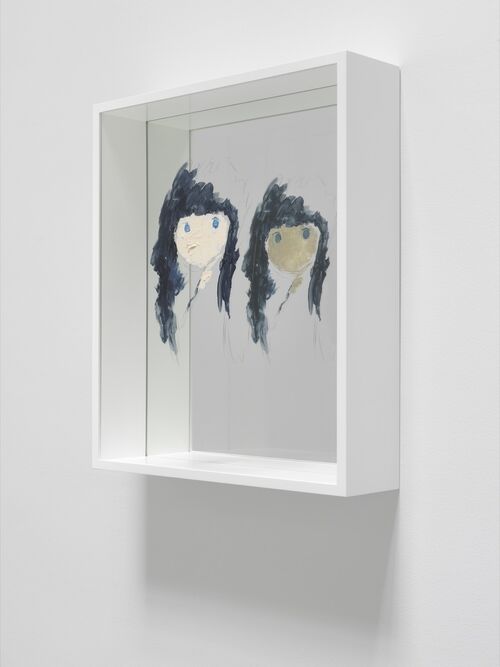 Fulfilling the exhibition’s Instagrammable potential, Deitch has mounted a series of selfie-inducing mirrors by Makoto Taniguchi. The artist creates untitled, wood-framed boxes with a pane of glass on top, over which he paints abstracted, cartoonish faces. They reflect off the mirror at the back of the box, so that viewers simultaneously see the images and their own faces. The floating heads have round circles for eyes, but no noses or mouths—accentuating their ghostliness and enhancing the sensation that as much as you’re looking at them, they’re also watching you. 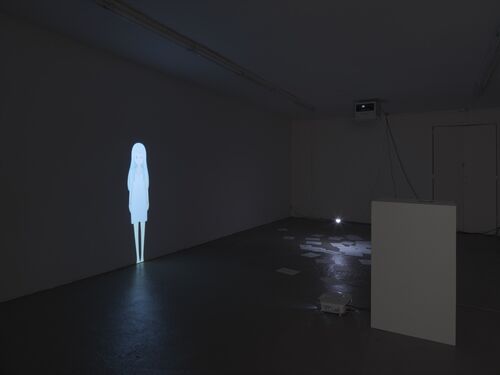 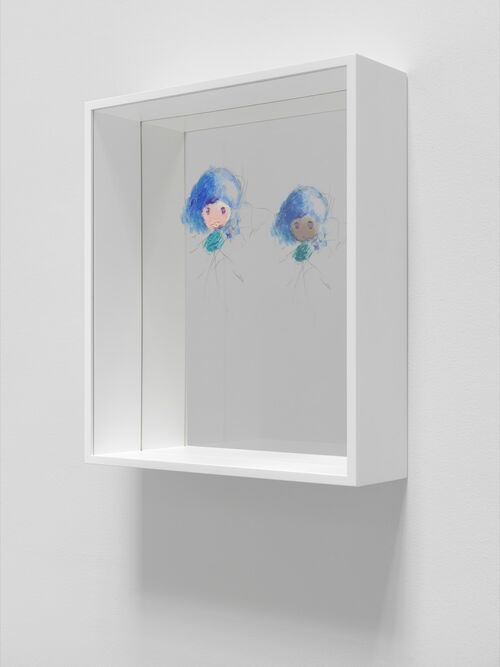 A darkened room features his installation ANOKO (2005–19; 2012 edition on display), which consists of a printer that spits out illustrations of cartoon girls. The paper falls and litters the floor, creating a haunting performance and turning a machine into its primary actor.

How The Nightingale Confronts the Violence of Rape