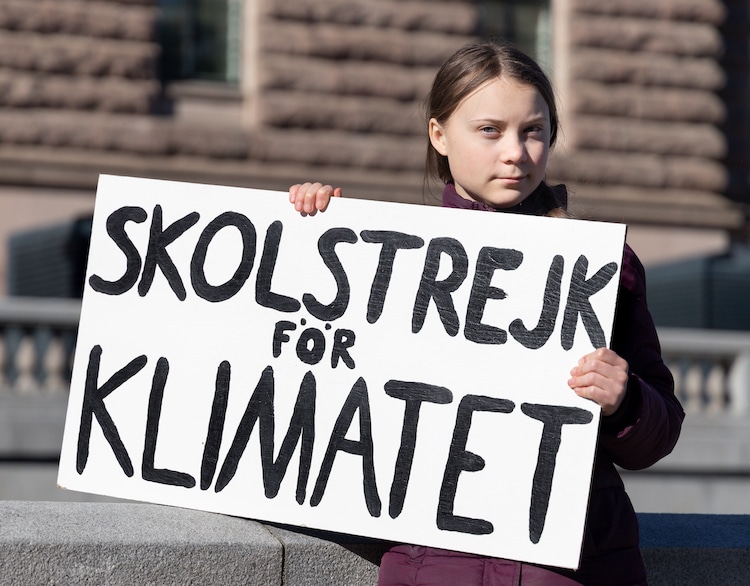 Stock Photos from Per Grunditz/Shutterstock

The call for action in the global climate crisis is heating up. On September 20, in the lead-up to the UN Climate Action Summit, protestors in over 1,000 cities across 185 countries took to the streets for the Global Youth Climate Strike. Led by 16-year-old Swedish activist Greta Thunberg, young people around the world showed up to demonstrate their dissatisfaction with how world leaders are protecting our planet.

It’s estimated that around 4 million people participated in the 6,000 global events, which is a stunning number when one thinks about how this movement began. In a little over a year, Thunberg—who began protesting alone outside Swedish parliament—has been able to mobilize and inspire people of all ages to get active and make their voices heard. The young environmental activist has been spearheading a movement to make politicians accountable and demand tangible answers on how they plan to combat this urgent crisis.

Thunberg was originally inspired by students from Marjory Stoneman Douglas High School in Parkland, Florida who began protesting for stricter gun laws. Alarmed by what she calls “the greatest crisis in human history,” Thunberg tried to mobilize other students; and when they weren’t interested, she set out on her own. For three weeks, she protested outside of Swedish parliament to place pressure on them to meet the emissions standards of the Paris Agreement. When pictures of her holding a sign that read Skolstrejk för klimatet (School Strike for the Climate) went viral, she leveraged her visibility into something even greater.

First came the Fridays for Future movement, where youth around the globe were encouraged to protest for action against climate change every Friday. What followed has been an incredible tidal wave of support that’s led to what has been called the “Greta Thunberg effect.” Her blunt speaking manner and incredible fearlessness when addressing world leaders has been a wakeup call in the face of the scientific facts Thunberg presents. “We’re facing an immediate unprecedented crisis that has never been treated as a crisis and our leaders are all acting like children,” she stated during a 2018 talk in London.

Now, if the Global Youth Climate Strike is any indication, she’s not alone. In New York City, she marched alongside a crowd that’s been estimated to be anywhere from 60,000 to 250,000 participants. “Right now we are the ones who are making a difference. If no one else will take action, then we will,” Thunberg told the crowd. “We demand a safe future. Is that really too much to ask?”

Thunberg was also a speaker at the first-ever UN Youth Climate Summit, where she reflected on the power of protest. “Yesterday, millions of people across the globe marched and demanded real climate action — especially young people,” she stated. “We showed that we are united, and that we young people are unstoppable.”

These kids have the smarts, the courage and the heart to fight Global Warming. What they need is for leaders in Washington to have their backs. #ClimateStrike pic.twitter.com/GuZVbldUaH

Expected to make further remarks in front of the UN at the opening of the General Assembly’s Climate Change Summit, Thunberg is using her voice to effect change and proving that one person can make a difference. To that end, the short film Nature Now is one of several projects she’s lending her voice to. In this case, Thunberg narrates the film along with writer/climate activist George Monbiot.

The film serves as a call to action to protect, restore, and fund Natural Climate Solutions (NCS), which are actions that use living ecosystems to help pull carbon from air. Currently, only 2% of climate change funding is spent on these solutions, which have been scientifically proven to provide more than a third of the emissions reductions needed to keep global heating below 1.5 degrees Celsius. People are encouraged to use the hashtag #NatureNow as they share the film—files are available online (with the password “wecanstillfixthis”).

Learn more about why Great Thunberg was moved to action in her inspiring TED Talk.

The post How Greta Thunberg Sparked a Global Climate Strike to Better Our Planet appeared first on My Modern Met.

Sequined and Baubled Masks by ‘Damselfrau’ Fascinate with Mysterious Beauty